The Hampshire Down breed as a terminal sire is working well for Gloucestershire based farmers, Phillipa and Sam Page. The good eating quality of the lamb is attracting more customers to their farm shop and the excellent growth rates and good killing out percentages are ticking the boxes for the deadweight market too. 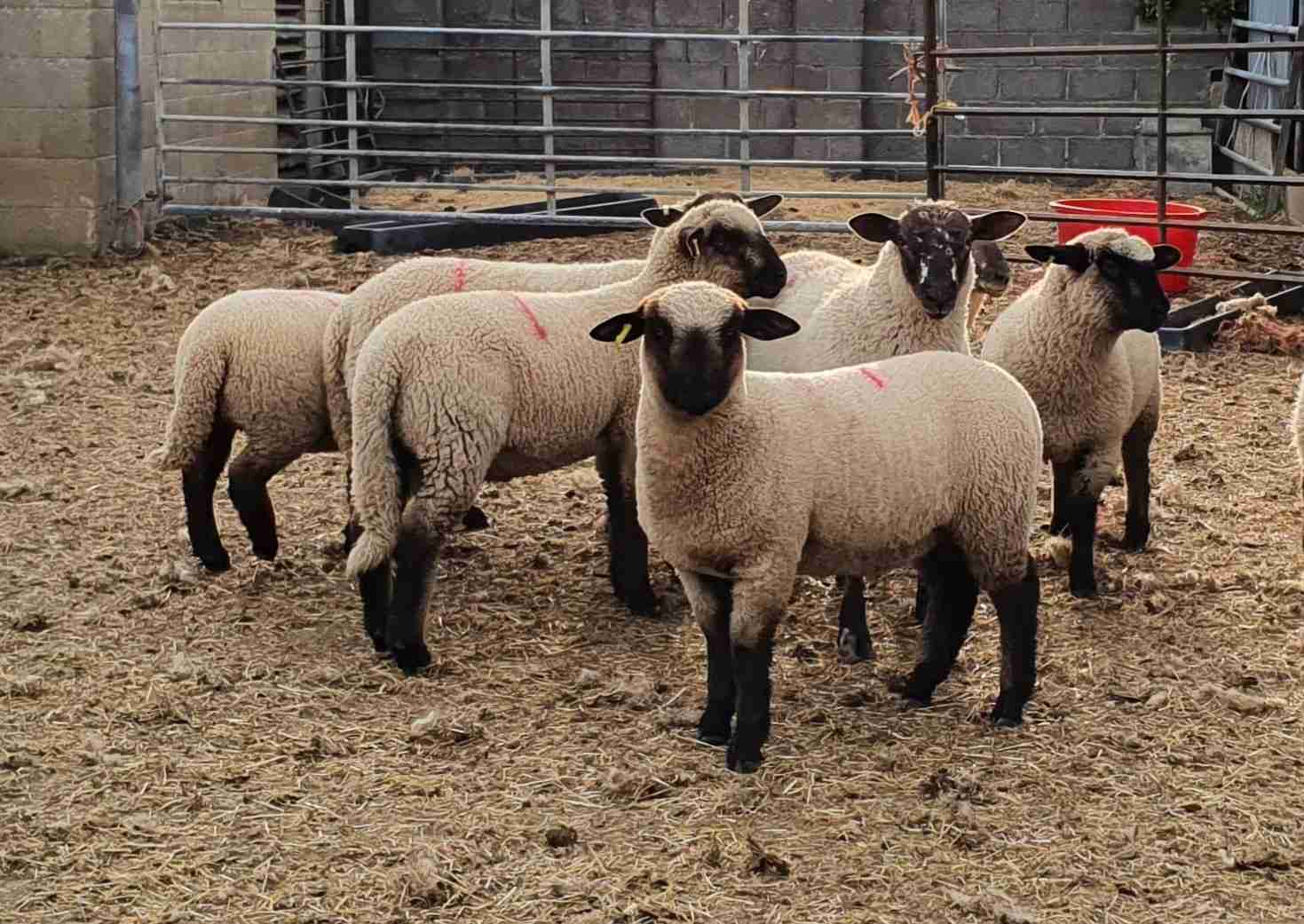 Mr & Mrs Page are in year 8 of a 15 year tenancy on Grange Farm rented from Gloucestershire County Council. The farm is 100 acres with some winter grazing taken every year in the area. Their Farm Shop was opened five years ago and sells lamb, pork and turkeys reared on the farm, plus fruit, veg, cheese, beef, honey, milk, cakes and bread produced locally. The shop was selling 6-8 lambs a month at the start and has now grown to 16 lambs a month.

‘The lamb sales have doubled since we started helped by the Corona Virus increasing our footfall significantly with customers looking to buy locally. Now they have tasted the lamb we’re confident that we can keep them coming back’ said Phillipa. ‘The new customers like the fact they can ask questions and see where their food is produced as well as the quality of the product’

The 300 ewes that are kept are a mixture of early lambing Suffolk Mules which lamb in January/February to the Hampshire and the North Country mules are lambed in April which gives them a good supply of early lambs for the shop and then right through the year. Historically a combination of Meatlinc and Texel rams were used and a maternal Suffolk to produce replacements. A Hampshire was introduced a couple of years ago and it was found that they produce good lambs on both types of ewes. ‘We aim to have the Hampshires killed at 38kgs as the smaller joints are easier to sell in the shop’ explains Phillipa. ‘We like to be able to lamb early too as generally the commercial prices are better then’

The remainder of the lambs are sold through Randal Parker or Dunbia Carnaby with pleasing results due to the good killing out percentages.

Phillipa added ‘With the good growth rates the lambs are on the farm for less time which is a big plus point, they fit both of our markets of finished lamb production sold deadweight and lamb specifically for our farm shop and we find their temperament easy to work with’

So if you’re selling direct to the customer or selling commercially the Hampshire breed has a lot to offer so why not give one a try!

The Hampshire’s thriftiness, ease of growth and carcass and eating qualities are key to success for Hertfordshire young farmer

Harry Elsden, a self employed agriculture contractor from Hertfordshire has built up a medium-sized flock in just seven years and sells in the region of 500 lambs direct to customers annually. The 26 year old from a non farming background dreams of sheep farming full time but at present rents several parcels of land to run his sheep enterprise from. 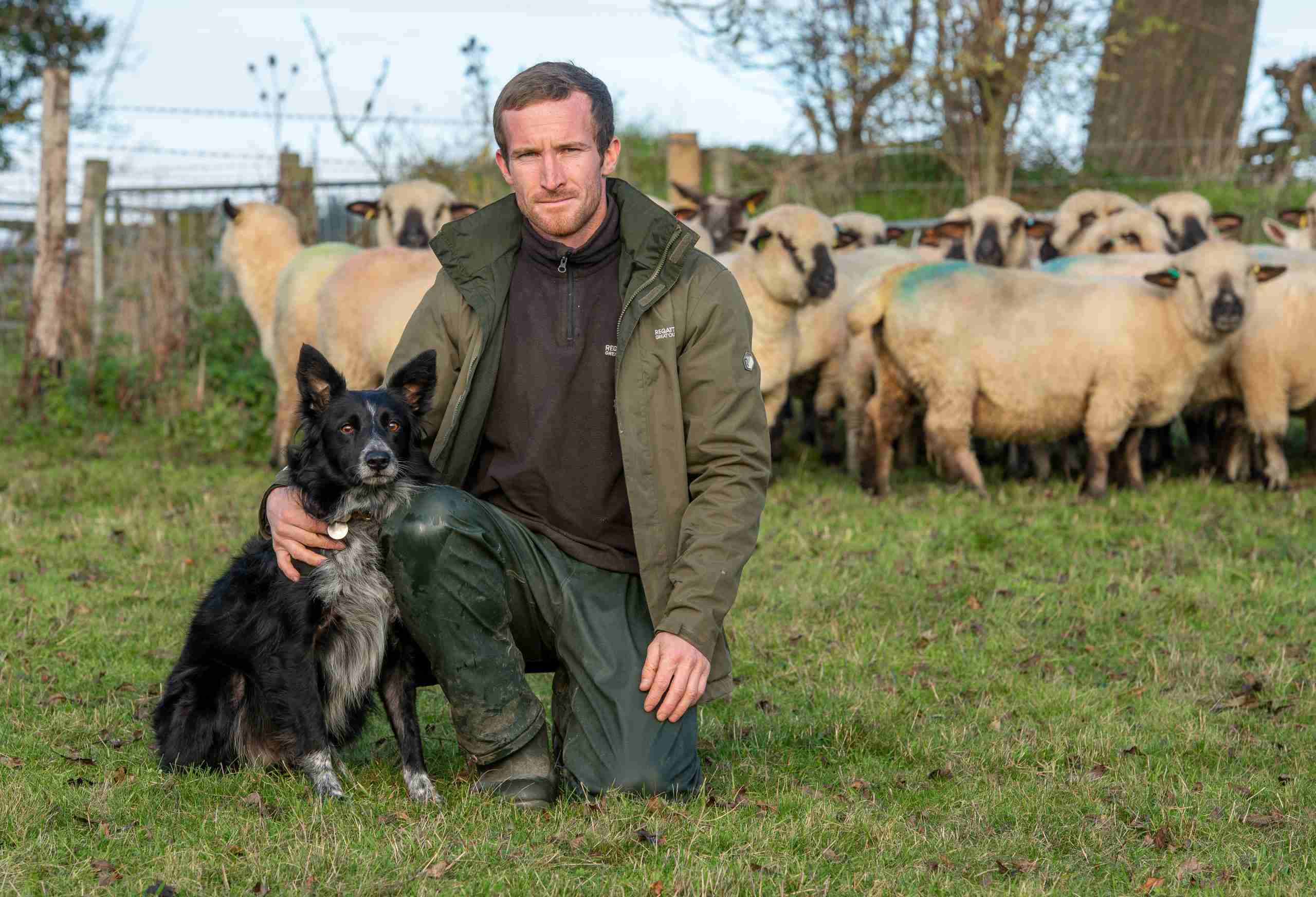 To maximise the output from lamb sales, he operates a mainly flying flock of 270 mixed breed ewes. Some three-quarters of the total go to Hampshire Down tups from his small pedigree ‘Hertford’ flock, while the Hampshire crosses are put to a Hampshire cross Beltex which he breeds himself. He finds this crossbreeding system ideally suited to his farming practices and to the demands of his customers.

“The Hampshire down ram brings the thriftiness, ease of growth and carcass and eating qualities that are essential for making my policy work,” says Mr Elsden. “The lambs have rapid growth rates and the ability to finish off grass with minimal or no concentrate input”

He adds “Another Hampshire Down trait is good carcase quality and it has the potential to achieve the top grading specification. Most of my lambs will grade E and U, with a handful of R grades. I aim for a 42kgs plus animal which will reach 22-23kgs deadweight. “As a sire, the Hampshire Down cross Beltex will produce a very similar lamb but whiteheaded, although markings are not important to me. These lambs will improve high carcass grade consistency, without compromising eating quality and growth rates.” Lamb is supplied every month of the year, with the exception of February and March. Therefore, some 20 Hampshire Down ewes and a similar number of commercials are lambed in December and January with the main flock being lambed from mid-March.

Concentrate feeding is not offered until the month before lambing, when they will build up to 0.5kgs/head/day; the winter-lambers are also fed for the first eight weeks. The early lambs are creep-fed, but the rest will finish off grass.

Direct Marketing is key to Mr Elsden’s sheep enterprise success one sales avenue is the Tewin Bury Hotel in Welwyn, Hertfordshire where Mr Elsden rents the surrounding ground. Lamb features prominently on the menu and on average the hotel takes three or four lambs each week throughout the year. One of the Tewin Bury’s young chefs, Lucy Wigmore, was a finalist in the 2019 M Restaurants and Bookatable ‘Young Chef of the Year’ award. Miss Wigmore finds the meat versatile and complementary to a wide range of ingredients, adding that Hampshire Down lamb has exceptional flavour and colour.

Other local businesses, including a farm shop, a local golf club, several butcher shops and a number of independent restaurants also take lamb. A fixed price is negotiated per kilo deadweight for customers including butchers, while about 100 lamb boxes containing a variety of cuts are marketed at £130 each, leaving Mr Elsden with £90/head after processing costs. The boxes are usually delivered to the customer direct from the abattoir. “My customers want top quality meat and they like a certain amount of fat cover, to improve its flavour,” says Mr Elsden. “They are also looking for a slightly heavier carcase than some of the alternative markets demand and a 21kgs deadweight lamb is ideal for their requirements.”

Mr Elden said “My aim for the pedigrees is not primarily to win at shows, although I enjoy exhibiting my livestock,” he notes. “The goal is to produce the type of Hampshire Down tup that will suit the commercial farmer. “My Hampshire Downs must be able to convert forage on a range of different types of pasture and survive over winter in some fairly exposed fields.”

Mr Elsden plans to increase his ewe numbers in the future to about 400 ewes and sell 20 breeding rams a year to the commercial market. If he can continue to generate boxed lamb demand and command a market premium, the overall policy should allow him to become a full-time shepherd.

“The Lleyn and Cheviot cross Texel ewes are great mothers and easy to work with which is ideal at lambing time as we lamb everything outside.”

Having used Texel cross Beltex tups previously they found they were having to pull too many lambs which increased workload at lambing time and caused problems during the night.

In 2016 in a bid to reduce that problem the couple experimented with a Hampshire Down ram. Bill says “He was put to the test in his first year as he tupped 50+ ewes in one of the mildest winters and springs where grass was good and the ewes were fitter pre lambing,even with that, we didn’t have to pull any of the lambs.”

Tupped at the beginning of December to start lambing from 28th April on wards they get through the winter on minimal feeding with only a tonne of bucket feed licks. Their home bred ewes usually scan out at 192% to produce a 175% lamb crop at spring time.

“All the Hampshire Down cross lambs were easy lambed, vigorous at birth and quick to get to their feet.”

Just as important to Bill and Ruth they noticed they grew slightly quicker than the three-quarter Texel lambs and produced just as good a grade, with those finishing yielding mostly U and R grades. Bill and Ruth have a relatively low stocking density which contributes to the lambs rarely having to be wormed. They don’t have to be vaccinated or scratched for orf either, and with an abundance of grass, all lambs are sold finished off grass, keeping costs to a bare minimum.

“We’ve tried a number of breed and crosses over the years but I would have to say the Cheviot cross Texel suits our system best with the Hampshire Down being the preferred terminal sire.”

If you want a low input system, these are the breeds that have to be considered. They believe they have found a winner with the Hampshire Down, with the progeny and the tups easy to manage. After 2 very different lambing years and now 2 Hampshire Down tups, Bill and Ruth also think there is the potential for the Hampshire Down cross as a breeding female

News On Summer Events and Sales

The Scottish Farmer Hampshire Down Champion Of The Decade Goes To MAES GLAS.

28th June 2020
We use cookies to ensure that we give you the best experience on our website. If you continue to use this site we will assume that you are happy with it.Ok